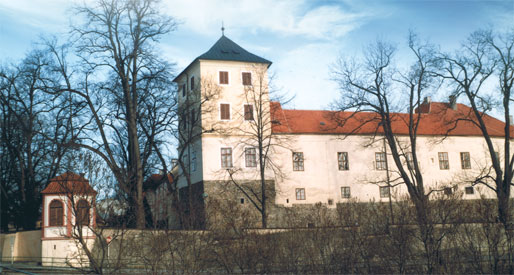 The Horažďovice château is situated on the location of a Gothic fortress built in the 13th century by the Bavarians of Strakonice. In 1292, King Wenceslas II elevated Horažďovice to town status. In 1483, the local demesne became the property of the House of Švihovský of Rýzmberk, which rebuilt the Gothic castle into a Renaissance château. The only remnants of this reconstruction are a small inner courtyard with arcades and fresco paintings and a two-storey château tower. Under the administration of Půta Švihovský, namely in 1503, water mains from Prácheň were established. They were in use until 1932. Following the Battle of White Mountain (1620), the demesne was seized from the House of Švihovský and acquired a new owner: In 1622 it was bought by Adam of Šternberk. In 1681 – 1692, the Šternberks rebuilt the château in Baroque style according to the designs of the Italian architect Solomini.

A fresco on the ceiling of the Large Hall

The result was the birth of the Large Hall with fresco paintings, the walling up of the arcades in the courtyard and the building of a château chapel and farm premises. In 1834, the demesne became the property of the Counts of Kinský of Vchynice and Tetov, who did not make any major adaptations. After the World War II, in 1945, the demesne was appropriated. 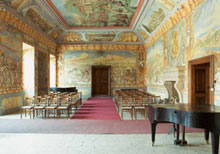 The Large Hall was built circa 1680. The supporting structure of the ceiling is formed of wooden ribs, on which wooden prisms coated with animal hair are nailed. Between these prisms there is a layer of plaster, which is only 5 cm thick. The ceiling fresco is 75 m2 and represents the Battle of Vyšehrad on October 31, 1420, in which the Hussites defeated the troops of Emperor Sigismund. Václav Vojtěch of Šternberk had the fresco created in memory of these fallen ancestors.

Under the ceiling fresco there is a cavetto with a veduta of South Bohemian towns, namely Horažďovice, Písek, Tábor, Hluboká (Frauenberg), Zahájí (Zahen) and České Budějovice. The veduta shows what the towns looked like at the time of the War of Austrian Succession in the reign of Maria Theresa in the first half of the 18th century.

The frescos on the walls depict scenes from the wars with the Turks during the reign of Leopold I. One of the scenes is the Battle of Vienna in 1683, while the other scenes represent military life in the field. You can see a field mass, the slaughter of horses, robbing the dead and the care of camp followers. These frescoes are unique for their themes and arrangement. 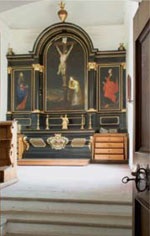 The château chapel was built in 1680, when the château was under reconstruction. On the ceiling there is a fresco from 1712 representing the “Elevation of the Holy Cross”, the oldest parts of the altar – side chests – date from 1691, while the other parts are from the middle of the 18th century.